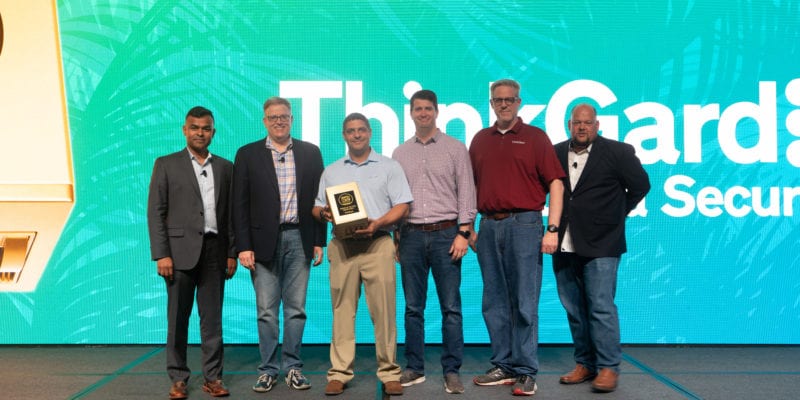 Pelham, Alabama, June 26, 2019– ThinkGard, LLC today announced the company took home the Unites States Pioneer of The Year Award at DattoCon19, Datto’s seventh annual partner conference that welcomed more than 2,900 attendees from 24 countries around the globe. Each year, the Golden Datto awards are presented to the best of the best among Datto’s partner community. This year, the awards were given across nine categories recognizing a range of talented, world-class MSPs.

This award recognizes the partner that is blazing a new path for Datto, specifically when it comes to utilizing Datto’s Marketing Development Funds Program to help build brand awareness. This Partner participated in the program and developed a plan of action for recruiting new clients and growing their business overall. Many factors play a role in building a successful marketing event, and this Partner clearly separates themselves as a Pioneer of The Year. ThinkGard’s ROI from the events they held well exceeded any expectations.

“Our partners are critical to the small and medium-sized business community, and we’re proud to honor the top performing partners with the Golden Datto awards at the event each year,” said Rob Rae, Vice President of Business Development at Datto. “We’re so excited for ThinkGard for earning the Pioneer of The Year award and demonstrating their commitment to growing their business and helping their clients succeed.”

“Last year we took home US Partner of the year and we thought that it couldn’t get any better than this but, to take home an award for our marketing efforts of course surprised and pleased us beyond belief, said Lesilie Leonard, VP of Sales & Marketing at ThinkGard. “People in the managed services space don’t typically focus as much on the marketing aspect of the business but with Datto’s Marketing Development Fund program their partners would be insane not to use it! We focused mostly on educating both business leaders and their IT Directors on how they can avoid being victims of ransomware. The response has been phenomenal. Datto makes it possible for us to bring more Tech events to the Birmingham Metro Area. In fact, we’ve got another Datto sponsored event in Birmingham AL coming up in August.”

As the world’s leading provider of IT solutions delivered by Managed Service Providers (MSPs), Datto believes there is no limit to what small and medium businesses can achieve with the right technology. Datto offers business continuity and disaster recovery, networking, business management, and file backup and sync solutions, and has created a one-of-a-kind ecosystem of partners that provide Datto solutions to half a million businesses across more than 130 countries. Since its founding in 2007, Datto has earned hundreds of awards for its rapid growth, product excellence, superior technical support, and for fostering an outstanding workplace. With global headquarters in Norwalk, Connecticut, Datto has international offices in the United Kingdom, Netherlands, Denmark, Germany, Canada, Australia, China, and Singapore. Learn more at datto.com.